Choose Your Next Oud with Confidence

Custom-Made Ouds
Oudinstrument.com offers custom made that can be designed, built, and shipped in less than one month.

33 Checkpoints of Inspection
Oudinstrument.com offers custom made that can be designed, built, and shipped in less than one month.

Fast Free Shipping
We use UPS, DHL, Fedex, and other carriers which all offer secure, guaranteed shipping as fast as 3 days.

Video testimonial from our clients sent as a testimony from around the world!!

Need help or having a question ?

Send us a message, we are here Monday to Saturday

The oud is the most prominent Arabian instrument in the Arab world today and it is the historical ancestor of the European lute which would eventually evolve into the guitar. There are many different branches of the oud that stem from different regions such as Egypt, Iraq, Greece, Turkey, Saudi Arabia, UAE, Qatar, Armeni, Israel, Morocco, Iran, and Singapore. There are three main variations in size and measurements of the oud depending on whether it is an Egyptian, Turkish, or Iraqi oud. The oud is made of a smooth, hollow, pear-shaped body with a short, fretless, neck that has 11 strings with 5 paired strings in unison and a single low bass string. 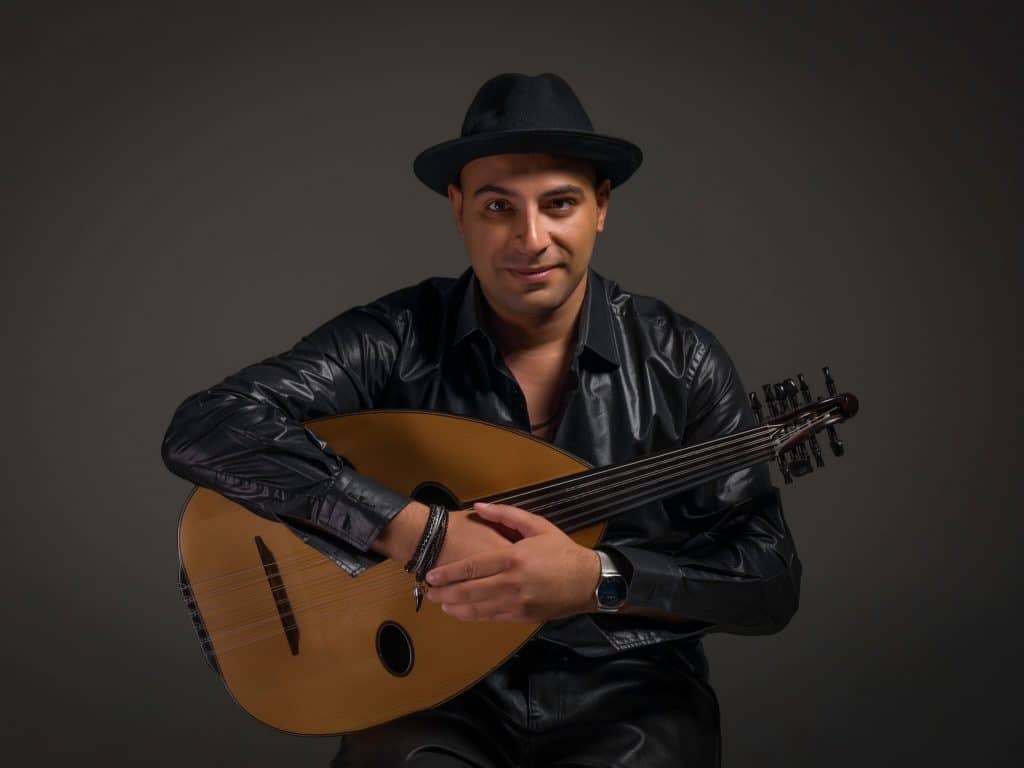 The History and Origin of the Oud

The history of the oud goes back to 3000 BC as there are biblical references that claim Lamech, a descendant of Adam, is the true creator of the oud. An oud first appeared in ancient Babylon around 2350 BC- 2170 BC which is the modern day country of Iraq and then the instrument was found in a region that would be considered modern day Iran around 1700 BC. As the oud continued to spread, it would start to appear in Saqqara, Egypt and Syria around 1580 BC -1090 BC. Eventually the oud spread to most of the Middle East, North Africa, and regions of Central Asia. The oud became a very well known instrument and first came to Europe in the year 711 AD when Spain was under the control of the Islamic Umayyad dynasty.

The Egyptian Hieroglyphic Origin of the Oud

The origin of the oud is often debated and there are various contrasting opinions. Ancient Egyptian hieroglyphs written on the walls of a tomb in Tyba city state that the oud was the instrument of Egypt since the before 15th century BC and that the oud originated in the region of modern day Iraq. In addition to the evidence given from the hieroglyphs, an oud was found in a tomb in AlBadary city, Egypt which dates back to the 14th century and it now sits on display in the Egyptian Museum of Cairo.

The Jewish history and the Oud

According to Jewish history the oud was used by the Egyptian aristocracy and high priests, but was then brought back to Israel through the Jewish exodus from Egypt. The Isrealite’s adoption of the oud helped spread its influence to the Middle East and one of the most notable oud players in history was King David.

The Ancient Mesopatamian Origin of the Oud

The most accurate and widely accepted theory of the oud’s origin is that the oud originated in ancient Mesopotamia which would be considered modern day Iraq. The oldest recorded oud was found in the Mesopatmian region and it now sits on display at the British Museum in London, UK. This oud was dated to be from 2350 BC and this is the evidence that supports the Iraqi origin theory of the oud.

In sum, the oud originated in the Iraqi region and spread to ancient Egypt where it was only used by the upper class and priesthood community, for the oud was commonly used as a spiritual instrument for the priests and worshipers. Once the oud spread from Egypt it was adopted by many more people from different classes and regions, yet the oud music has always coincided with spirituality and some religious practice.

The Identity of the Turkish Oud

The Turkish oud is larger than other ouds and it produces a deeper sound with more mid-low bass. The measurement of the neck of a Turkish oud is typically 20cm-21cm and the fixed bridge that holds the strings is 9 cm away from the base of the oud. A Turkish oud is easily identifiable from the Shamsya design that covers the holes of the oud. The Shamsya keeps more of the sound in the body of the instrument and this is what creates the deeper sound. The tuning of Turkish oud is unique because each note is tuned to be one and a half notes lower than the common oud notes. For example, playing an open string of C on an Iraqi or Egyptian oud would be a Bb on the Turkish oud.

The Identity of the Iraqi Oud

The Identity of the Egytian Oud

The Egyptian oud is considered to be the middle sized oud, for the measurement of the neck is usually 20 cm and the strings go to a fixed bridge. The holes of an Egyptian oud are usually covered or partially covered by  Shamsya design. The tuning of the Egyptian oud also uses the world standard of 440 hz and is tuned to the vocal range of a male singer. The Egyptain oud has a rich sound and it is considered to be the Sultan of Sounds when it is used in harmony with Egyptian singers to perform Saltana singing or Tarab music. Like the bass in Jazz music, the oud is the main instrument of the Tarab music genre and culture.

The Identity of the Electric Oud

In the 21st century, with the technological revolution, the electric oud was invented by an Armenian oud maker named Najarian. Like an electric guitar, the electric oud is not hollow, the sound can be amplified, and the sounds can be modified. The electric oud is a modern version of the well known, Arabian instrument, and it allows the musician to play for larger audiences, make new sounds, and expand the oud into new genres of music.

Like iPhones replacing flip phones, the iOud is a brand new era for the oud instrument that has been developed and patented by The School of Oud Online and invented by Ramy Adly. The iOud is a revolutionary advancement of the electric oud that has technology built into the instrument which allows it to make over 20,000 different sounds from pianos, violins, beats, sound effects, and much more. The iOud also has revolutionary technology that can transcribe the notes being played into any form of sheet music. The iOud has changed the oud into an instrument that can be used for all genres of music production and it is a very powerful tool for any musician.

Watch The iOud in action

To Buy an Oud ,, you know where to shop